Government figures show a 46% fall in UK territorial emissions. But this excludes emissions from international aviation and shipping, and from the manufacture, transportation and disposal of the products we import. The UK is just following international rules, but these rules are hopelessly outdated. Once these missing emissions are included, our total carbon footprint (‘consumption-based emissions) fell by just 18% from 1990 to 2019. That's not even 1% per year!

The CEE Bill would require us to take responsibility for all our emissions, wherever they occur. This is a well established principle, with best practice for companies now to include Scope 3 Emissions when calculating their carbon footprint.

The good news is that accounting for the emissions caused by imports will lead to policies that help bring back manufacturing - and jobs - to the UK, where we can make low-carbon products on our ever greener power grid. What's not to like about that?

International aviation and shipping were omitted from the 2008 Climate Act due to complications determining which country bears responsibility. But these emissions are becoming ever more significant and we can no longer ignore them. The government has now announced it will include aviation and shipping in its targets from 2033 (the Sixth Carbon Budget), but it continues to allow airport expansion around the country which is not consistent with achieving those targets.

Equally we cannot ignore imports. Many of our companies have outsourced their manufacturing to countries like China. When we order products from abroad, the resulting manufacturing emissions are caused by our consumption decisions. It's only fair to add these emissions to our account. But going beyond fairness, markets cannot operate efficiently if carbon costs are not recognised. It is already best practice for companies to include the emissions of products they purchase (Scope 3 Emissions) when calculating their carbon footprint. See British Standards Association’s PAS 2050 standard.

Recognising the carbon cost of imports will give an advantage to UK companies, helping bring back manufacturing and jobs to the UK where we can manufacture low carbon products with our increasingly green electricity grid. This will also help take the pressure off China to build new coal power stations.

The UK has made good progress in decarbonising power generation, but a large portion of the headline 46% cut in emissions has been achieved simply because we have moved so much domestic production overseas.  Those emissions have not gone away.

This graph summarises the problem: 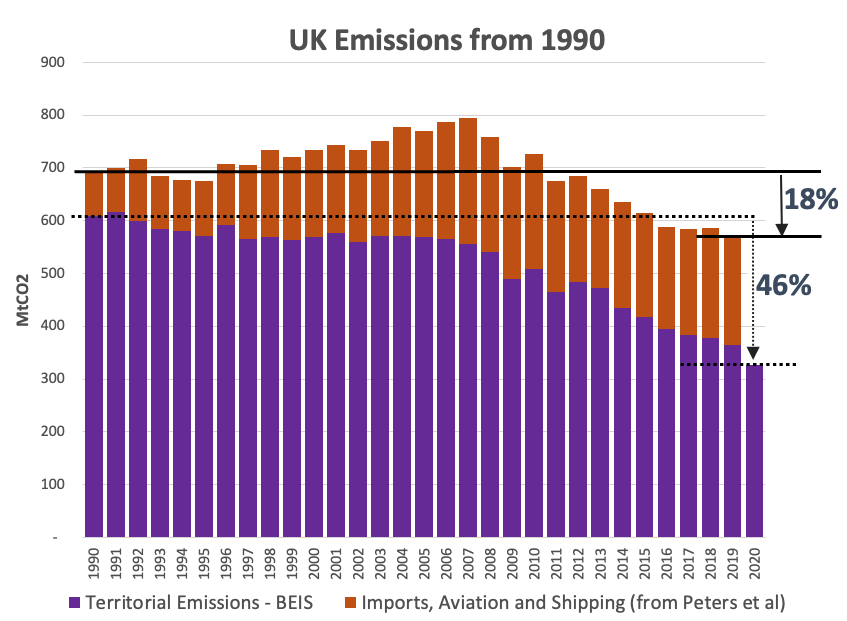 A WWF study running to 2016 shows an even less favourable picture, with just a 15% drop.