Why do we need the bill if we have the Climate Change Act 2008?

The Climate Change Act (CCA) is based on science well over a decade old requiring only an 80% reduction in emissions by 2050 despite the Government now aiming for net zero by 2050. The CCA only deals with one part of our total carbon footprint, emissions occurring within our territorial borders. It excludes our emissions from international aviation and shipping, and from the manufacture of the goods we import. Our carbon budgets (five yearly emissions reduction targets) are still based on this outdated legislation and hence far too easy to achieve. This gives a false confidence that we are doing well when in fact our emissions are falling far too slowly to avoid the worst of climate change.

The Climate Change Act (CCA) was world-leading legislation in 2008, but is based on science well over a decade old and its ambition now falls short in two key areas:

1. It requires only an 80% cut in net greenhouse gas emissions by 2050 when the Government now is aiming for a 100% reduction to reach net zero. 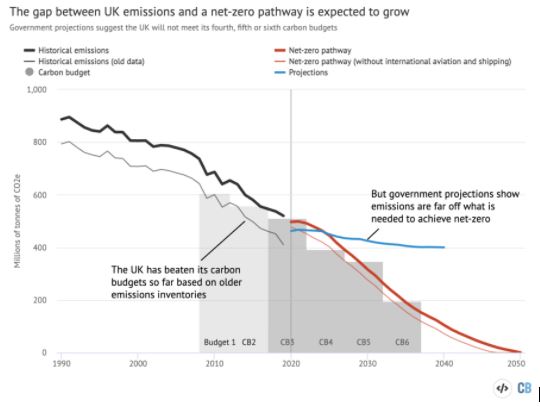 2. It doesn’t account for our emissions from international aviation and shipping, or from the manufacture of our imports, and these have been allowed to grow since 1990.

Yet the UK’s carbon budgets (it’s five yearly emissions reductions targets) are still based on this outdated legislation. The new 6th carbon budget effective from 2033 is now consistent with net zero by 2050 and does include aviation and shipping, but still excludes imports. However, 2033 is far ahead, and we need action now.

This means we are working to targets that are far too comfortable to set us on a path to meet the Government’s net zero by 2050 aim. This has helped us meet our first three carbon budgets with few changes in how we do things.

But more than this, the Climate Change Act contains nothing to link the action we are taking to what’s necessary to limit global temperature rise to 1.5°C. It simply sets an emissions reduction target. UN scientists issued an entire report about why the 1.5°C limit is vitally important. In contrast, the CEE Bill expresses its aims in terms of the desired end result of limiting warming to 1.5°C, thereby ensuring that we keep up with the latest science, always doing what is necessary to stay on track.

Other areas in which the Climate Change Act is no longer sufficient are:

Under the CCA 2008, the Government must respond to the passage of a carbon budget by presenting to Parliament a strategy for meeting that budget, yet no specific deadline is required. The plan must be produced ‘as soon as is reasonably practicable’. This means that there is a lack of urgency and the Government is not fully accountable. The CEE Bill, in contrast, will set annual legally-binding carbon budgets to ensure emissions reductions remain on track.